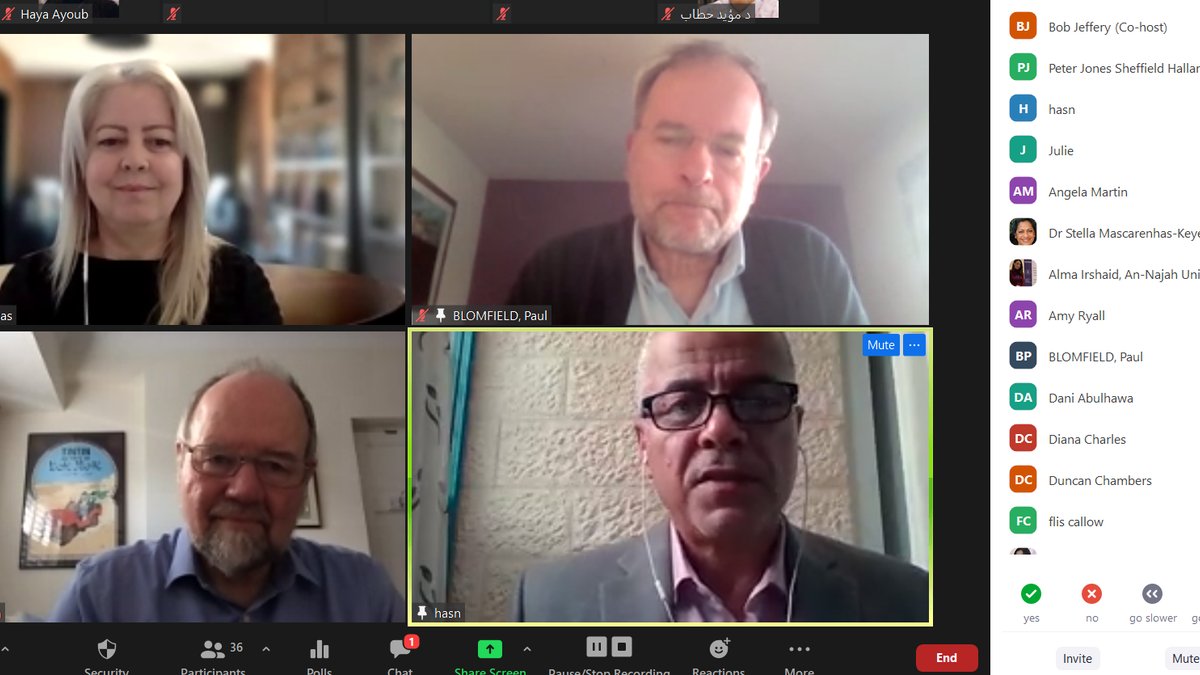 On Monday 12th April a digital meeting took place to formally launch the An-Najah Universities Sheffield-Alliance. Sheffield, a city of 600,000 residents in the north of England, has two universities – the University of Sheffield and Sheffield Hallam University – which between them have a student population of 60,000. Academics and lecturers in Higher and Further Education in the UK are represented by the University and College Union (UCU).

Dr. Kherieh Rsas, Vice President for International Relations and Development at An-Najah, gave the initiative by UCU Sheffield to establish an alliance with the Union of University Staff at An-Najah a strong endorsement, saying she and her colleagues would work to build on this strategic collaboration to the mutual benefit of all three institutions.
Other figures endorsing the initiative were Dr. Karen Grainger, member of the Board of Governors of Hallam University (in a personal capacity), Paul Blomfield, Member of Parliament for Sheffield Central, and Sir Vincent Fean, former British Consul General to Jerusalem. Yazan Khader brought a message on behalf of Palestinian students of the Sheffield universities.
Representing An-Najah university staff, Prof of Political Science Hasan Ayoub spoke of the value of building academic co-operation between collaborating partners “from the bottom up” and welcomed the opportunity to expand horizons on all sides. Initial remarks about possible areas of collaboration were offered by Dr Peter Jones of Sheffield Hallam and Dr Lisa Stampnitzky from the University of Sheffield.
The collaboration is the result of a period of discussion and planning between staff representing the three universities. Out of this came an agreed framework. Dr. Jones presented the Aims of the alliance as follows:
1. To establish a mutually beneficial partnership between the universities of Sheffield and An-Najah with a view to developing formal inter-institutional academic collaborations and memoranda of understanding based on commitment to the following principles:

2. To create cooperative and collaborative academic events, for staff and students, in fields of common interest in areas of teaching and research.
3. To raise awareness and understanding within Sheffield and the UK of the circumstances and challenges for Higher Education at an-Najah University and for Palestinians generally.
4. To foster mutual understanding of the Higher Education landscape and future directions and challenges for the university sectors of both countries.
5. To establish a Trade Union Alliance between the staff unions of the three universities in order to foster mutual support and understanding, to build solidarity action and to progress the programme of support for the Palestinian cause adopted by the UK Trades Union Congress at national level.
6. To invite other Higher Education institutions in Palestine and the UK to join our Alliance in order to develop a more extensive network of inter-university links and collaborations between our two countries 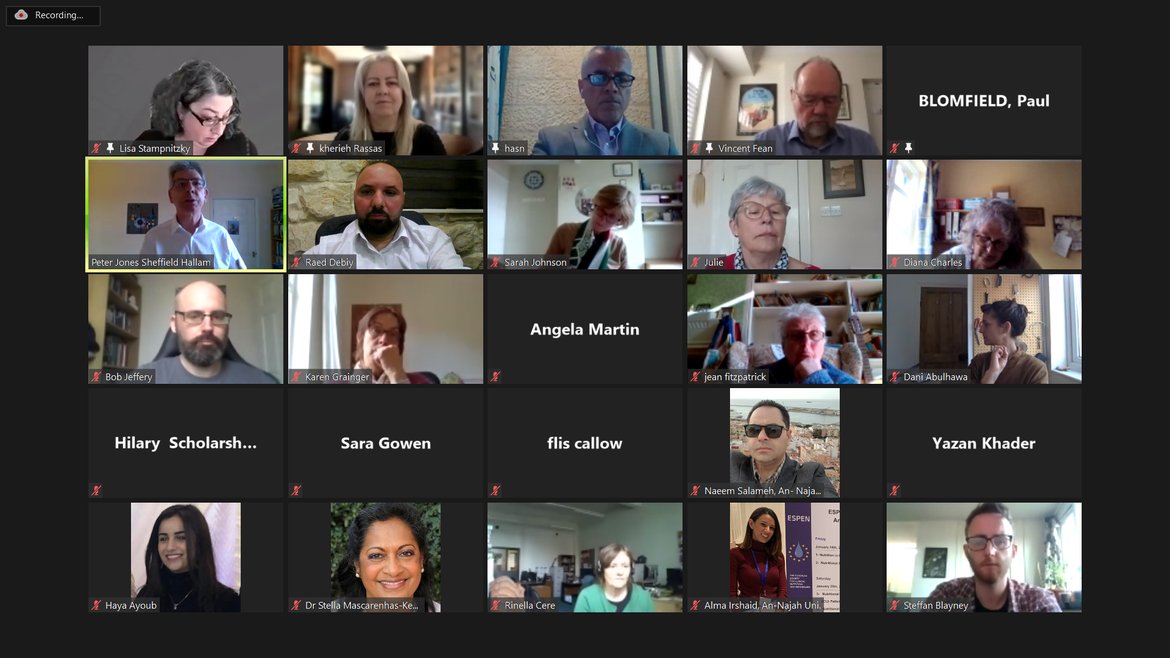 Dr Raed Debiy, lecturer at the political science department at AN-Najah gave the presentation:  “University Education under Occupation’, which attracted many UCU members to attend the meeting. Dr. Raed represented  the many achievements of An-NajahUniversity, with its high ranking internationally and many centres of excellence, in the context of defiance of decades of attempts by the Israeli occupation to break the spirit of the institution and its members. With photos and film he illustrated the violence endured including the four day military siege of 1992, the arrest, imprisonment and even murder of students or academic colleagues for simply speaking out and organising against the occupation. Student Ziad Hasiba explained how the simple fact of being a Palestinian student under occupation brought the attention of Israeli intelligence and that activity considered normal for students everywhere else could result in arrest, detention and the destruction of lives.
Dr Bob Jeffery, President of Sheffield Trade Union Council and campus convenor of Sheffield Hallam UCU, spoke of actions taken over many years in solidarity with the Palestinians, including campaigns against his own university’s investment in companies profiting from the Israeli apartheid state. This takes place in the face of pressure from the UK government on universitiesagainst their own policies of ethical investment. Dr Lisa Stampnitzky from University of Sheffield spoke of the impact on British universities of government attempts to shut down critical scholarship and “rethink” the British colonial role in the world and imposition of the IHRA definition of anti-Semitism which sought to suppress criticism of the Israeli state by conflating this with anti-Jewish racism. She was encouraged by growing resistance to these pressures and development of collaborations such as the alliance. 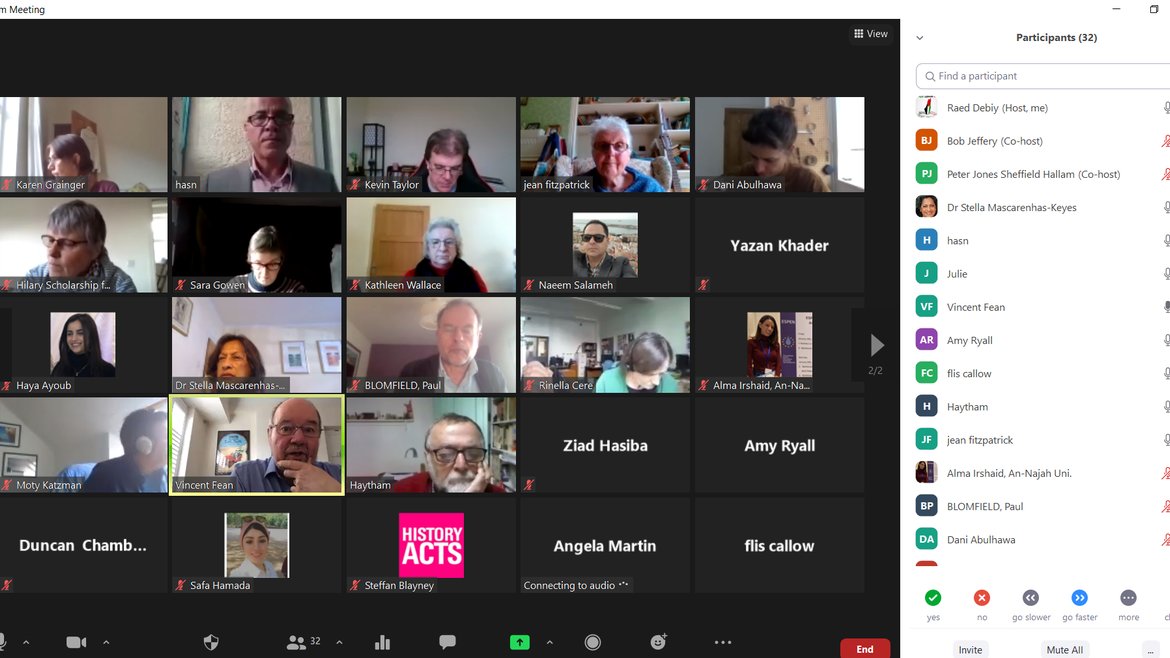 A free ranging discussion followed with constructive proposals emerging including:

The event was moderated by Julie Pearn, Chair of Sheffield Labour Friends of Palestine.  The Alliance is supportive of a wider initiative to establish a full twinning partnership between the cities of Sheffield and Nablus.