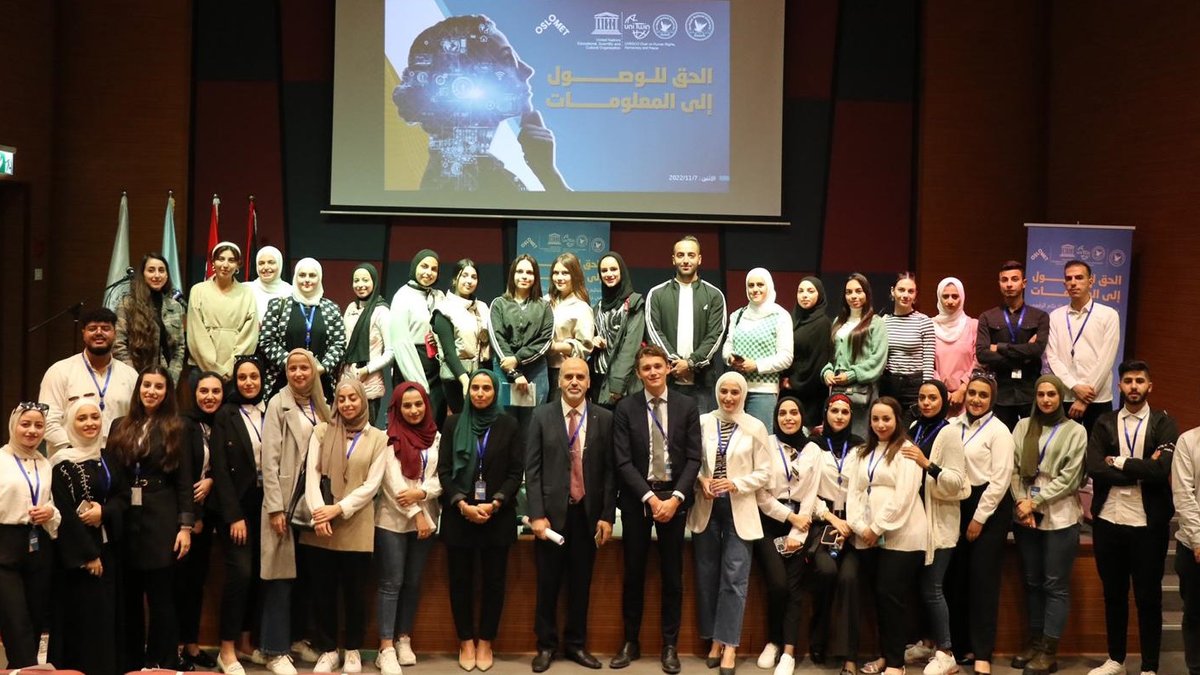 The Department of Communication & Digital Media at An-Najah National University, in cooperation with Journalism and Media International Center (JMIC) at Oslo Metropolitan University (OsloMet), organized "Access to Information" Conference at An-Najah University on Monday, November 7, 2022, in commemoration of the International Day for Universal Access to Information, declared by UNESCO in 2016.

The participants called for the adoption of Access to Information law in Palestine, as it is a legal guarantee to protect the citizens' right to knowledge, and the right of a journalist to obtain the information needed to develop democratic participation and achieve sustainable development in society.

The conferees also called for the development of effective mechanisms to spread the culture of access to, and use of, information, and the removal of all obstacles that prevent citizens from knowing what is happening and what decisions are being made regarding public affairs.

Besides, conferees warned that the blocking of information opens the way for the spread of rumours and hate speech. It also destroys one of the important bases in building a democratic society that protects human rights and establishes the principles of transparency and integrity in society.

Ms. Muna Hawash, Head of Communication & Digital Media & Radio and Television Departments opened the conference by stressing the importance of Access to Information, considering that information is the basic element for a journalist. She considered that this principle is the cornerstone of journalism, and that the citizens' right to know is a human, moral and legal right. 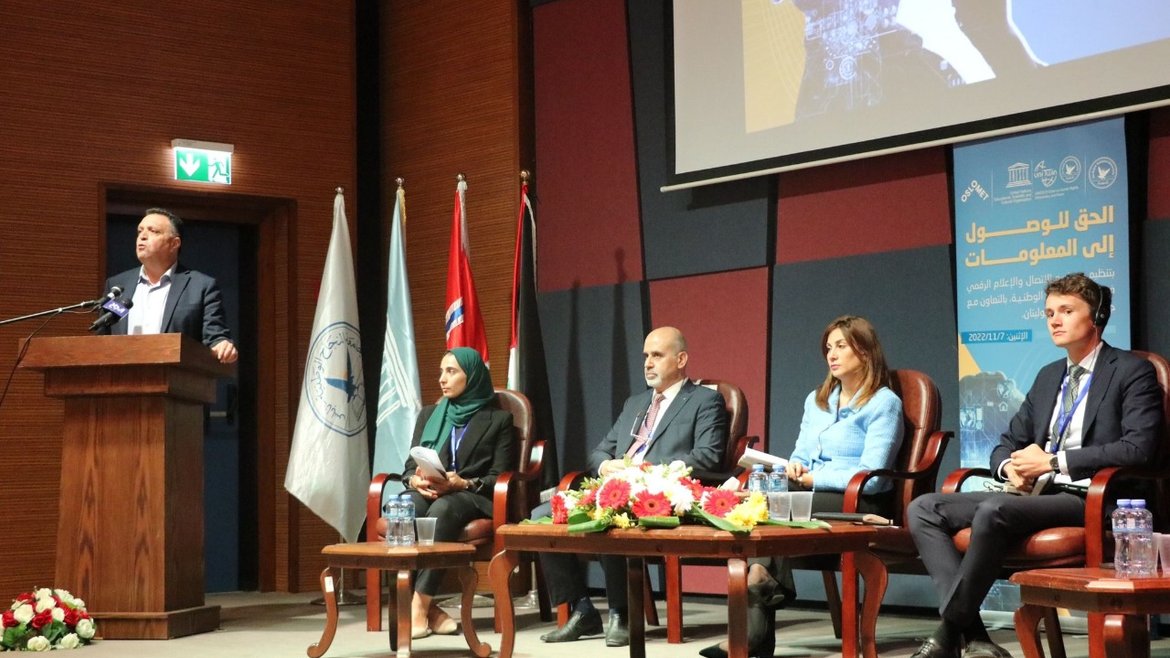 Dr. Farid Abu Dheir, coordinator of joint projects with Oslo Metropolitan University (OsloMet), highlighted the cooperation with OsloMet which extends to 23 years. He praised the activities and events that were carried out during those years and the benefit that was reflected on the participating students.

Dr. Abu Dheir explained that the conference aims to integrate the concept of Access to Information in media materials and school curricula, and to seek the adoption of an exclusive law that protects the citizens' right to knowledge.

Nasser Jawabreh, Director of Ministry of Information office in Nablus explained that the Israeli Occupation is the biggest challenge for Palestinian journalists, making Access to Information an arduous issue

For his part, Mr. Ruben Johansen, First Secretary of Political Affairs at Norwegian Representative Office in Palestine, expressed his gratitude for participating in the conference at An-Najah University in Nablus which witnessed harmful Israeli restrictions on the movement of the population, as today's talk is about human rights, including freedom of movement.

Mr. Johansen stressed that the Norwegian government is proud to support the cooperation between An-Najah National University and Oslo Metropolitan University. He also mentioned that Access to Information is the key to the improvement of human rights globally.

He pointed out that although all countries of the world pledge the citizens' right to access information, many countries impose laws restricting this right. In addition, he stressed the importance of Access to Information in avoiding false information to which journalists are vulnerable. He also mentioned the protests taking place in Iran to activate this right.

Mr. Ruben concluded his speech with stressing on the importance of human rights in light of the Israeli occupation attacks, and praised 7amleh Foundation, which tirelessly works to preserve human rights. “I am sure that this conference will succeed,” he said.

In the second session of the conference, Dr. Saeed Shaheen, Head of Media Department at Hebron University; Dr. Islam Halayqa, Lecturer at the Department of Radio and TV at An-Najah National University; Mr. Emad Al-Asfar, Director of Media Development Center at Birzeit University; Ms. Kholoud Assaf, News Editor-in-chief of the Palestinian Wafa News Agency; Mr. Mohammed Daraghmeh, Correspondent of Elsharq TV, made presentation on experiences regarding Access to Information in Palestine. The speakers stressed the importance of Access to Information as the main pillar of media work, and an urgent need for citizens in their private and public life. The participants called for not succumbing to the information-blocking policies imposed by governments and public and private institutions, and the need to seek information. Mr. Emad Al-Asfar pointed out that the existence of investigative journalism in developed countries proves that withholding information is a practice that is carried out in all countries of the world, including the Western world.

The third session was dedicated to young media students at An-Najah, Birzeit, Palestine Technical University (Khadoori) and Hebron universities, where the session was moderated by Laith Hasson and Dana Al-Saifi from the Department of Communication & Digital Media at An-Najah National University. As the above mentioned universities were represented by Roaa Khuffash, Loard Hadeed, Dareen Hamd, and Raed Al-Sharif respectively.

The participants stressed the importance of Access to Information for young journalists and the need to remove all obstacles to the journalist's work that prevent them from doing their job professionally and effectively. 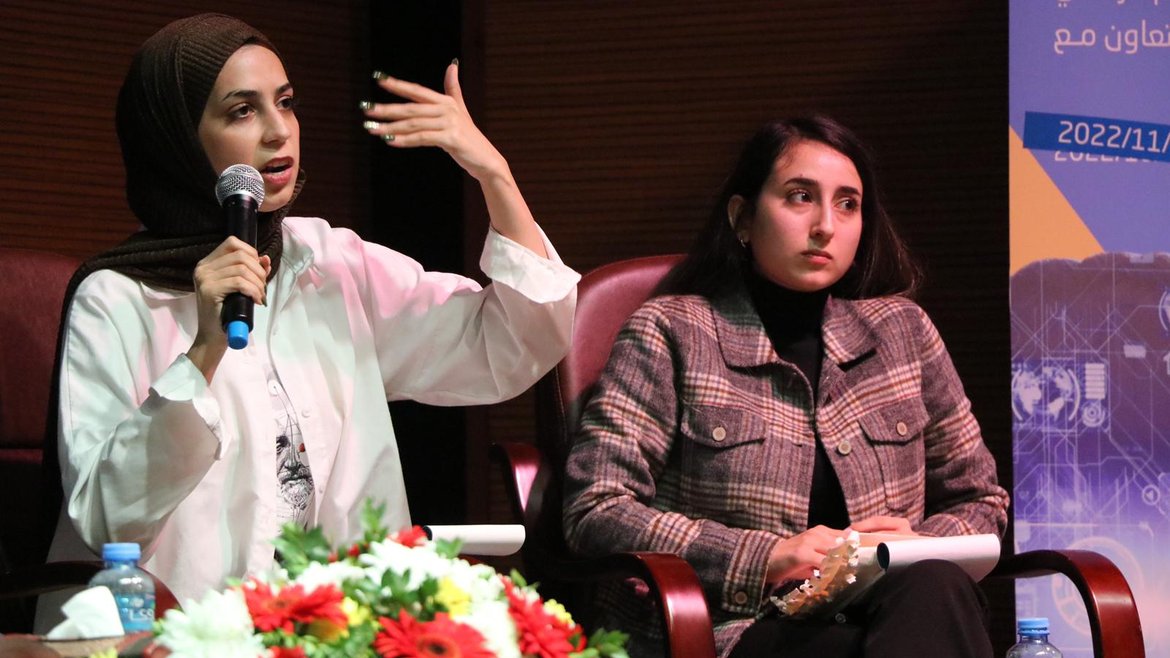